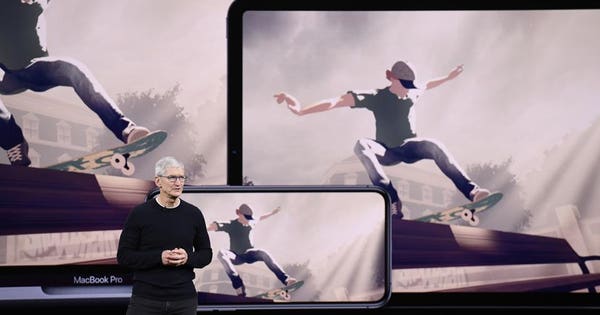 Apple is expected to launch a new MacBook Pro later this month and hand a very small cup of lukewarm water to the parched throats of the macOS-powered geekerati. Tim Cook and his team are going to make sure the new laptop will go unnoticed by the general public when it is announced.

In Apple’s push to emphasis software and services, it’s tough to look at macOS and wonder what the deskbound platform would look like if Apple had decided to make it successful in its own right. As well as its role in being the developer platform for iOS and iPadOS apps, macOS has been slowly turned into a subsidiary OS which supports the features of iOS. New apps are rarely for new desktop purposes, but to support existing mobile purposes.

While the world is moving towards mobile, there is still a strong place for desktop apps. But Apple’s focus is on iOS, on subscription services delivered to mobile, and how to support the cloud based services. It’s tough for any Mac to stand out when your seen only as a secondary supporting character.

Most Apple watchers are expecting Tim Cook and his team to organise a second consumer event at some point in October (my money is on October 29th) and this will be the last opportunity in 2019 for Apple to publicly introduce the 16-inch MacBook Pro…  which is already in production ahead of the launch.

But the event is unlikely to be just about the new MacBook Pro… or the full MacBook or Mac range… Apple’s slate has a number of products that are going to be loved by Cook much more than the macOS machines. There’s the traditional ‘don’t you think the iPhone has been doing well’ reinforcement to the hand-picked audience which will take up some of the digital column inches.

Apple has been working on geo-location tags, and the expectation is that the Apple Tags system will launch at this event with the ‘new power’ of the iPhone 11 switched on by a software update to interact with these tags (and other Apple devices).

And then there’s the ‘direct’ competition in the form of the iPad Pro, which is also expected to pick up an update for the holiday season.

Given the choice between eulogising the new iPhone, increasing its functionality, and promoting the walled-garden of the iPad Pro… or giving the MacBook Pro family room to breath and luxuriate in the limelight, I suspect Cook will choose the former. I would love to be proved wrong but nothing in the last year or two suggests that is going to happen.

Finally, there’s another truth about the MacBook range as a whole, and the MacBook Pro individually, that has to be noted. No matter what Apple says on the stage, the MacBook Pro is going to struggle in comparison to its Windows 10 counterparts. There are laptops with far better designs and styling (such as Microsoft’s Surface Book series), there are laptops far better suited to gaming and multimedia creation (such as the Razer Blade Pro), and there are far more portable and practical business laptops (HP’s Elitebook range).

Even restricting a comparison to the headline feature (increasing the screen size to 16 inches), the new MacBook Pro is falling short not just of Apple’s previous large screened MacBooks, but also of the top line large screened laptops where the going rate on the diagonal is seventeen inches. It might be ‘the biggest and best MacBook Pro from Apple’ but it’s nowhere close to being the biggest or the best laptop in the market.

An employee is illuminated by the screen of an Apple Inc. laptop computer as he works at Flock’s office in Mumbai, India. Photographer: Dhiraj Singh/Bloomberg

I want Apple to prove me wrong. I want Apple to do more than a minimum viable upgrade to the MacBook Pro. I want a machine that is seen as more than a ‘use this to support your iPhone’, ‘code for your mobile devices’ or ‘edit your miniseries so it can feature on Apple TV’.

But I don’t think Apple wants any of that.