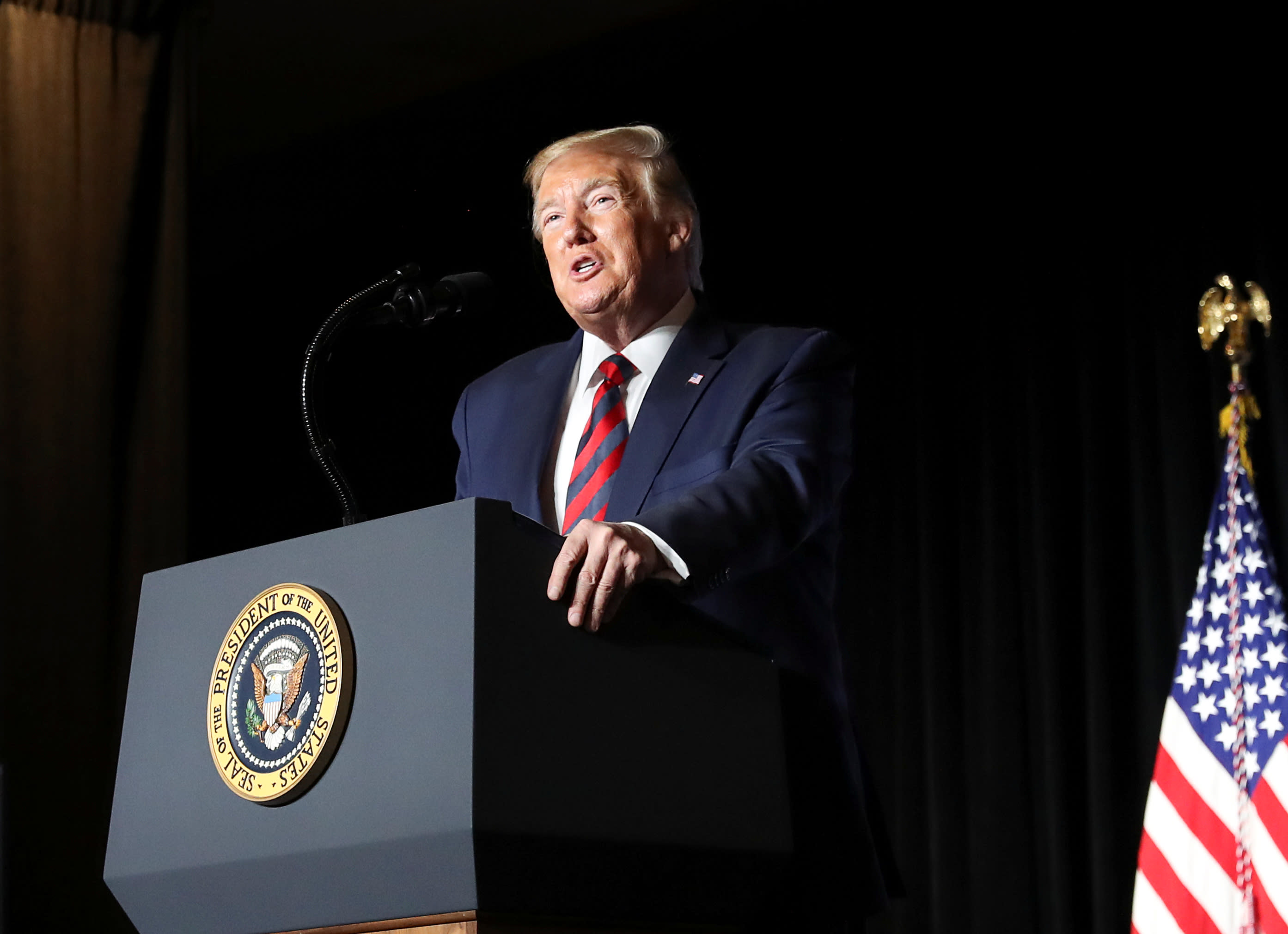 President Donald Trump on Wednesday called for the Federal Reserve to engineer interest rates to zero “or less,” in a new appeal for negative yields that he believes would help the U.S. curb its borrowing costs and stimulate growth.

Via Twitter, the president continued his campaign of lashing out at the Fed’s monetary policy. With the world economy sandbagged by the downside risks of the U.S.-China trade war, Trump called the central bank “boneheads” for missing out on “a once in a lifetime opportunity” presented by historically low yields.

The Federal Reserve should get our interest rates down to ZERO, or less, and we should then start to refinance our debt. INTEREST COST COULD BE BROUGHT WAY DOWN, while at the same time substantially lengthening the term. We have the great currency, power, and balance sheet…..

Trump reiterated his frustrations with Fed Chairman Jerome Powell, who he believes has not been aggressive enough in easing monetary policy in the face of a global slowdown.

Negative-yielding global debt, currently estimated at $16 trillion, is bad for savers and bank profits, but makes the risk of default virtually nil.

It also underscored the president’s growing fascination with negative rates, a condition where investors have sacrificed yield for safety by paying the bond issuer.

“Specifically as a mercantilst, Trump is focused on bilateral trade balances and U.S. exports…which he seems to think frustrate improvement” of the economy, said Marc Chandler, chief market strategist at Bannockburn Global Forex.

As yields on safe-haven government debt collapse globally — largely because of fears over the economy and expected central bank easing — borrowing costs have dropped sharply.

In fact, the Congressional Budget Office said last month that the federal government’s savings on borrowing costs translated into a $1.1 trillion net reduction in the CBO’s projections over the following 10 years, even as deficit spending surges.

Bank of America-Merrill Lynch (BofA) noted recently that “the ubiquity of negative rates has largely been a function of expected economic weakness. Markets have gone into risk-off mode, pushing [major economies’] rates ever lower as investors flock to safe-haven assets.”

The bank added that “the risk is that…yields continue their race to the bottom, inflating a bond-market bubble that poses yet another risk to the global economy.”

With inflation low, The European Central Bank, Swiss National Bank and the Bank of Japan have all committed to keeping rates negative — a policy Trump feels the Fed should replicate domestically.

A handful of experts believe negative rates serve a function, at least in the short term.

Krishna Memani, Invesco’s vice chairman of investments, wrote last week that the “goal of the central bank at the end of the day is to focus on growth and employment, and not to ensure that enough high yielding assets exist in the economy to meet some threshold of claims.”

The emphasis on higher yields “is a moot point as asset returns cannot be generated without underlying economic growth,” Memani said. That argument dovetails with Trump’s emphasis on the Fed needing to do more to bolster growth.

“If you frame the argument along these lines, you can see why in a low demand environment that low and even negative yields may be needed to support growth. There is nothing magically different about negative nominal yields,” Memani added.

However, other analysts have warned that sub-zero yields are a trap that will be hard to escape once growth and inflation return.

Amid negative sovereign rates, former Fed Chairman Alan Greenspan warned that it was “only a matter of time” before the U.S. saw them as well.

The yield on the benchmark U.S. 10-year Treasury (^TNX) is hunkered near record lows below 2%, and is expected to fall further.

‘The outlook has been darkening’: JPMorgan predicts 3 more rate cuts

Read the latest financial and business news from Yahoo Finance